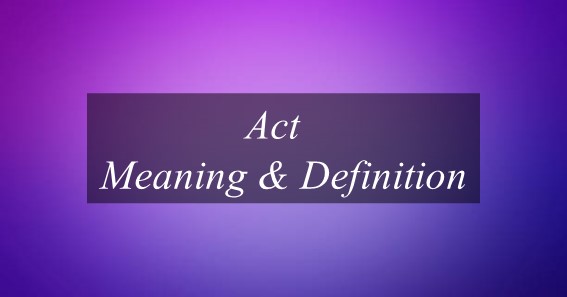 What Is The Meaning Of Act?

What Is The Meaning Of Act?

The meaning of the term act is to behave in the way specified. Usually act is also known as drama or stage performance based on a script.

The other words which can be synonymous with the term act are a pretense, show, charade, posture, pose, affection, appearance, etc. In simpler words, you can also define the term act as to behave in a stated way.

Act also has another meaning in terms of Law. You can also define the term act in terms of the law as, a bill that has passed through the various legislative steps required for it and which has become law.

Related terms which can be synonyms with the term” act in law” are statutes, legislation, law, regulation, enactment, bill. Most of the people question that “what is the difference between act and law?”. So, the act is a law that is passed by the Parliament or State Legislative Assembly while the law, in general, refers to the bunch of rules and regulations to be followed.

The term act is derived from the Old French word “acte”, which means the register of events. You can understand more clearly the term act by making the use of the term in the sentence. For example, he knew he had to act quickly.

Examples Of Using The Word Act Are:

Click here – What Is Meaning of Ascending? Find Out Meaning Of Ascending.