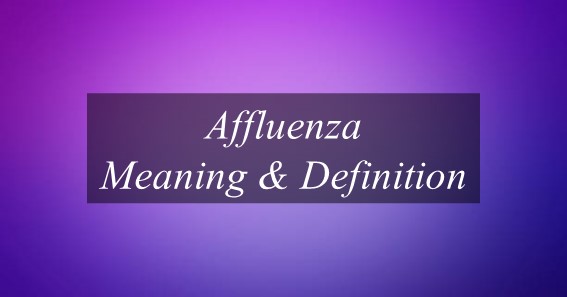 What Is The Meaning Of Affluenza?

The meaning of the term affluenza is that it is a psychological malaise supposedly influencing wealthy young people, symptoms of which involve an absence of motivation, feelings of guilt, and a sensation of isolation. This term is most commonly used by critics of consumerism.

The meaning of affluenza is most commonly according to the study is also defined as a painful, contagious, socially transmitted condition of overload, debt, anxiety, and waste resulting from the dogged pursuit of more.

The term has also been used to refer to an inability to understand the consequences of one’s actions because of financial privilege, such as in the case of Ethan Couch. Most of the people often question that, what are the symptoms of affluenza? So, generally, some of the common symptoms can be given such as chronic stress, shopping fever, a rash of bankruptcies, social scars, fractured families, resource exhaustion, etc.

You can also understand more clearly about the meaning of affluenza by making the use of the term in the sentence. For example, a shift away from affluenza, if we’re lucky enough to witness one, will come gradually, over a generation perhaps.

Most of the people often also question that, is affluenza a mental disorder? So, generally, no one can clear it out scientifically but they argue that affluenza causes overconsumption, “luxury fever”, consumer debt, overwork, waste, and harm to the environment.

Examples Of Using The Word Affluenza Are: