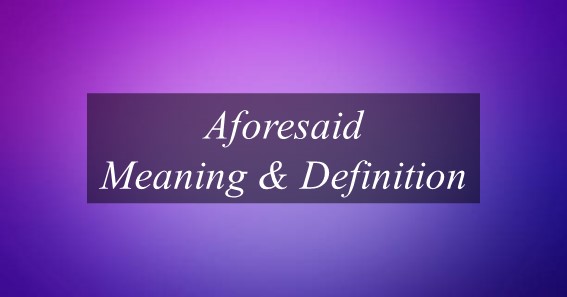 Contents
1 What Is The Meaning Of Aforesaid?
2 Examples Of Using The Word Aforesaid Are:

What Is The Meaning Of Aforesaid?

The meaning of the term aforesaid is that it is another term for the aforementioned. In simpler words, you can also give the definition of aforesaid as anything that was talked about earlier.

You can even understand the meaning of aforesaid more clearly by making the use of the word in the sentence. Some of the examples using the term aforesaid can be given as, it is a general statement that the aforesaid customs and liberties are to be observed by all categories, there is an intellectualist logic flowing with an arbitrary metaphysics as aforesaid, the providing shall appeal to this our Charter as revised or added to in manner aforesaid, etc.

Most people often also question that, what does the aforesaid case mean? So, usually, once you have talked about something it can then be referred to as aforesaid. You already know that to mention something is to bring it up, so if you consider that afore which means before, you will know that aforesaid is simply something that’s been said previously.

Examples Of Using The Word Aforesaid Are: