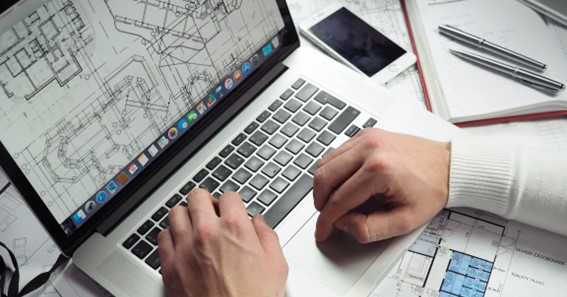 Hundreds and thousands of changes take place every decade in the world. Among all these changes, infrastructure development is certainly the most prominent for those who try to reckon with transformations. The history of the last few years or decades depicts that computer-based technology has played a major role in the sector of architectural development.

Computer-aided design or CAD is one such technology trend that has changed the course of architecture forever. Customized software took over the tedious task of design scaling on paper. Now, leading architects rely on these automated tools to create designs with a practical and aesthetic appeal.

However, the road to success with CAD technology and its utilization wasn’t quite a smooth one for professionals and the industry. In this post, we’ll dig into the grounds of CAD software, its emergence, its influence on design services, and its significance in the infrastructural domain.

Computer-Aided Drafting – Rise of the Future in the 1950s

Accomplished engineers and architects spend their entire day with efficient CAD software to craft building structures and make some hassle-free modifications. This vast transition from the typical paper-pen arrangement to our desktops and laptops feels more like a juxtaposition than a mere comparison. What’s more surprising is that CAD technology was introduced in the 1950s when many business sectors were struggling to make a mark in the market.

In 1943, engineers developed a general-purpose computer, initially designed to assist the US Army. After ten years, engineers made a significant upgrade in design and created the first graphics with CNC machines. However, 1964 was the most remarkable year in architectural engineering because that’s when the first commercially active CAD system was launched in the market.

Since these systems required a lot of time, money, and effort, only leading organizations such as General Motors, IBM, and Lockheed were able to use them. After a few modifications to GUIA graphic user interface, the technology reached another benchmark with Automated Drafting and Machine (ADAM) in 1971. 3D CAD and AutoCAD were introduced in the market in the 70s and 80s, following the launch of ADAM.

With more technological advancements through the years, several impeccably efficient tools and software made their way into the market. Interestingly, many of them are being used by architecture professionals even today.

Influence in the Real World

Conventional drafting required a considerable amount of time and an incisive approach to assure the functionality and quality of a design. Moreover, doing all of it on paper, making small edits, and sharing it with others was indeed an ordeal. CAD came out as a light source on the other end of the tunnel that streamlined architectural drawings more conveniently than ever. Pioneer organizations around the world now hire CAD outsourcing services for their projects.

Even though it sometimes requires the same scale of precision, professional architects now have access to advanced tools and technologies. Manual drafting is officially obsolete as leading architecture companies use computer-aided drafting to tackle even the most complicated projects within the suggested timeframe. A professional architect with a fundamental knowledge of structural concepts and optimal experience in software handling can create phenomenal designs effectively.

CAD encompasses design development and optimization. It enables engineers to formulate an error-proof representation and optimize the quality according to given requirements. The best part is that these tools are customized to comprehend material amalgamation. This way, it becomes easier to draft construction-friendly designs. Moreover, some software and tailored CAD tools also alleviate the inclusion of plumbing, electricity, and collective designs.

It took approximately four decades, but computer-based technology has made its way into architectural engineering. A glance at modern history also elaborates on the remarkable contribution of CAD to infrastructural development. Some of the most famous buildings in the world were constructed through designs made using CAD software.

One World Trade Centre in New York, Burj Khalifa in Dubai, and Trump International Tower in Chicago are some popular mentions. Architectural Design Services are broadly changing the world of architecture for people.

Facilitation of Design Planning with CAD

Designing an operational structure using pen and paper requires significant effort and precision. Even planning a design with traditional practices is challenging enough for professional architects. In fact, some professionals still use pen-and-paper arrangements to conceptualize a design plan and then upload it to the CAD software to download it in DFX, DWG, and other different formats.

When it comes to strategizing a design plan on CAD, architects have the advantage of building extensive and accurate designs that exhibit precision and functionality. Laid with visibility in 2D and 3D patterns, these CAD tools allow designers to assimilate creativity into operational structures.

Conclusion – CAD technology has made a revolutionising leap in the architecture realm because professionals have a scope to maximize their creativity and combine their knowledge of design implementation with an operational layout.