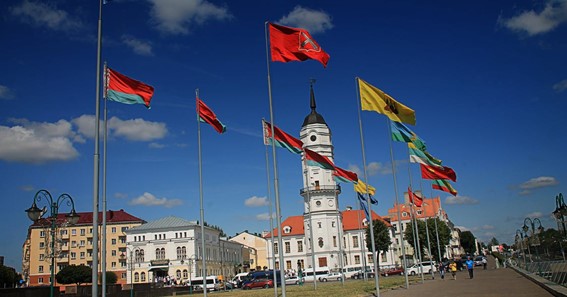 Flags of animal skins dating back to prehistoric times have been found which shows us that they have been around since the beginning of mankind. They were used to show what kind of family or tribe people belonged to, which is similar to what country flags are used for these days.

Nowadays the usage of flags is much more versatile. For example, see if a day goes by when you don’t encounter a flag somewhere. Hotels have a facade flag printed with their own logo on it or countries, banner flags at building stores and the beachflag which you see more and more at shopping streets . Flags are everywhere and there is a reason for it.

Power of the flag

Country leaders discovered that the usage of flags to identify which country is who is not only very handy to distinguish countries. The sight of their own flag made people feel chauvinistic. The whole country standing behind the same flag made them feel very strong and resulted in them willing to fight harder for their country.

But in the late 19th century something changed in the usage of flags. shops noticed that word of mouth advertising was not enough anymore to compete with the rising competition so they started to promote the store. In the beginning it was mostly posters that did the job but gradually some people began to notice that flags were a very powerful medium to promote your store, which at the same time made it very easy to localize for consumers.

One of the main reasons flags are so successful as promotional material is because of the fact that they are very visible in the streets. Flags make it very easy voor customers to locate stores from big distances. by hanging flags you attract a lot of visitors that would not even notice your store if there were no flags.

Another reason for the huge popularity among retailers is the fact that the price of flags is relatively low compared to other promotional products.

Whether you use it for promotion, show your country colors or your loyalty to some kind of group. Flags are used to distinguish and show others where you stand. Flags make people feel proud especially when they stand for something they belong to like a country, city or some kind of subculture.

Flags connect people and that is a very important thing in the times we live in.

Click here – Know Why Your Car’s Intercooler is Important