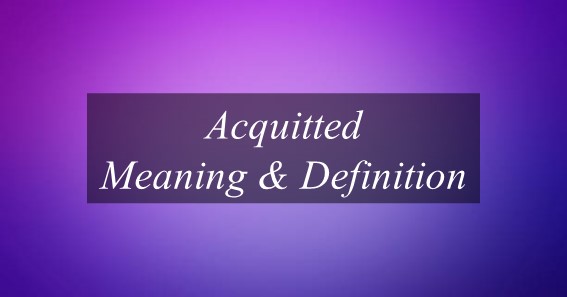 Contents
1 What Is Meaning Of Acquitted?
2 FAQ
2.1 Does Acquit Mean Free?

What Is Meaning Of Acquitted?

What Is Meaning Of Acquitted?

In simpler words, you can also define the term acquitted as, to decide officially in a law court that someone is not guilty of a particular crime. For example, if someone is acquitted of a crime in a court of law, they are formally declared not to have committed the crime.

The term acquitted is derived from the Middle English word “aquiten”, which means to give in return, to pay, repay, to redeem, etc. Most of the people ask that “is acquitted the same as dismissed”?. So, the answer is no, because with the dismissal the question of the defendant’s guilt never gets tried.

The effect of an acquittal on criminal proceedings is the same whether it concludes from a jury verdict or either concludes from the operation of some other rule that discharges the accused.

Examples Of Using The Word Acquitted Are:

Acquit means to set free, release or discharge as from an obligation, burden, or accusation. It is what a jury or a judge sitting without a jury does at the end of a criminal trial, if the jury or the judge finds the accused defendant not guilty of the crime.