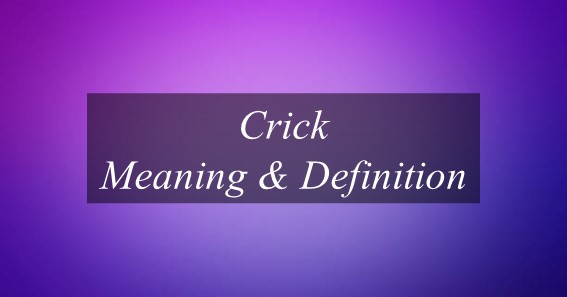 What Is The Meaning Of Crick?

What Is The Meaning Of Crick?

The meaning of the term crick is a painful stiff feeling in the neck or back. The other words which can be synonymous with the term crick are cramp, rick, kink, pang, pain, twinge, strain, sprain, twist, etc.

A painful, usually sudden stiffness in a group of muscles in the neck or back is also meant as crick. There are various ways for the treatment of crick such as you can try water therapy, apply heat to the neck or shoulder, or alternate heat and ice, do self-massage, or even try an over-the-counter pain reliever, such as acetaminophen, naproxen, aspirin, or ibuprofen.

You can also take some precautions to keep cricks away such as if you are prone to cricks gently stretch your neck muscles every day, rotate your head, pull it from side to side, be sure your bed and pillow help keep your neck in proper alignment, avoid awkward positions while sleeping, etc.

Most of the people ask what causes a crick in a neck?. So, doing heavy work or playing sports such as golf or tennis can also cause a crick, sometimes simply called a stiff neck. unwieldiness in the neck and the feeling that the neck needs to pop are general symptoms of a crick in the neck.

Examples Of Using The Word Crick Are:

What Is A Crick Of Water?

Crick is a variant of creek originating in the U.S., where it reflects a dialectal pronunciation of the word for a small, shallow stream. Crick might be nonstandard, but it is established enough to be considered an alternative form, and it is even listed in some dictionaries.