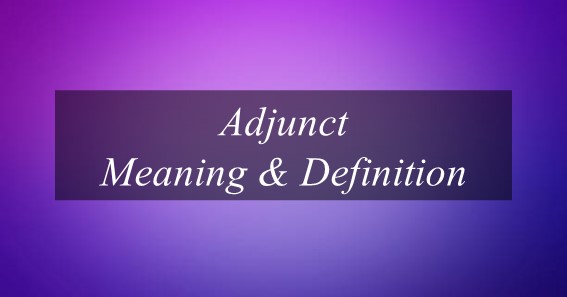 What Is Meaning Of Adjunct?

The meaning of the term adjunct is that it is a thing that is added to something else as a supplementary rather than an essential part. The other words which can be synonymous with adjunct are a supplement, addition, complement, add-on, accessory, appurtenance, accompaniment, addition, extra, etc.

For example, something that is an adjunct to something larger or more important is connected with it or helps to perform the same task. The word adjunct is originally derived from Latin “adjunctus”, which means to join.

You can also understand more clearly about adjunct by making the use of the expression in the sentences. For example, my math teacher was adjunct faculty and did not work for the school full time, I was part of the adjunct jury in the event that an actual member was dismissed, at the family reunion I felt like an adjunct member because I was not blood-related to anyone, etc.

The expression adjunct has many of its various abbreviated forms such as adjunct professor, adjunct employee, adjunct faculty, etc.

Each of the abbreviated forms of adjunct has different meanings. In a simpler and shorter definition, the meaning of adjunct can also be defined as something added on, but not part of the whole.