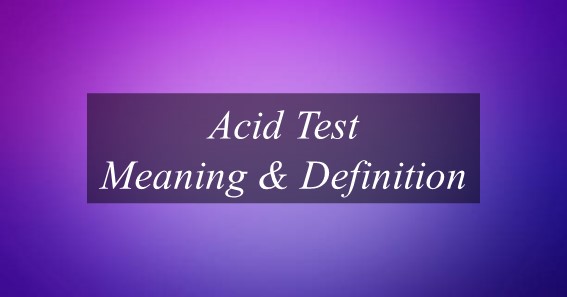 What Is The Meaning Of Acid Test?

The meaning of acid test is that it is a conclusive test of the success or value of something. In simpler words, we can also say that the true test of the value of something is known as the acid test. If in the scientific or metallurgical test the acid is used, then it is also called as an acid test. The word “Acid Test” also has its historical meaning rather than scientific meaning. The acid test was the series of parties held by the author Ken Kesey primarily in the San Francisco Bay Area during the mid-1960s century entirely on the use of, and support of, the hallucinatory drug LSD, also known as “Acid”.

The name “Acid Test” was coined by the author Ken Kesey, after the term “acid test” used by the gold miners in the 1850s. The thing whichever provides the conclusive confirmation about something that whether it’s true or false, good or bad, right or wrong, effective or ineffective, is called the “acid test”. it is not actually the “test” but something which gives such conclusive confirmation about something. The term acid test is also sometimes used more specifically in business as in the “acid test ratio”.

Examples Of Using The Word Acid Test Are: