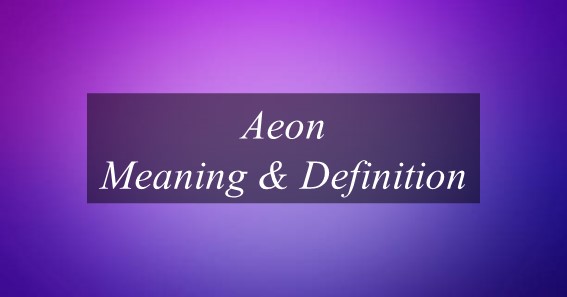 What Is The Meaning Of Aeon?

The meaning of the term aeon is that it is an indefinite and very long period of time. The other words which can be synonymous with aeon are age, generation, year, time, epoch, etc. The word aeon is also spelled as eon which was initially meant as living, a force of life, or being, age or a span of time.

You can also say that the expression aeon typically refers to life or lifespan. The latest meaning of aeon is termed as more or less similar to the Sanskrit word “kalpa” and Hebrew word “olam”. While the aeon may be used in reference to a period of a billion or million years, it has its more common usage for any long, indefinite, period.

Aeon can also introduce to the four aeons on the Geologic Time Scale that make up the Earth’s history, the Hadean, Archean, Proterozoic, and the current aeon Phanerozoic.

Roger Penrose generally uses the term aeon to describe the period between successive and cyclic Big Bangs within the context of conformal cyclic cosmology. In astrology, the exact meaning of the term aeon is defined as a billion years.

Plato handed down the word aeon to indicate the eternal world of ideas, which he formed was “behind” the opposite world, as revealed in his famous allegory of the cave.

Examples Of Using The Word Aeon: