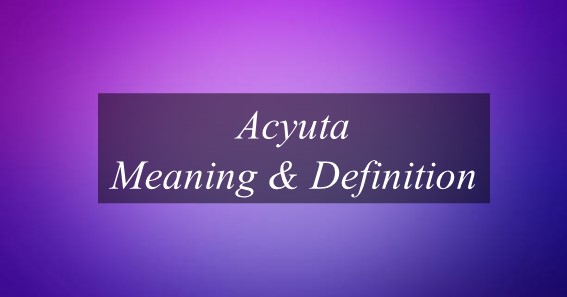 Find The Meaning Of Acyuta?

What Is The Meaning Of Acyuta?

Meaning Of Acyuta In English,

The meaning of the term acyuta is that it is another name of Lord Vishnu. The name acyuta in Hinduism appears as the 100th and 318th names in the Vishnu sahasranama.

It is often also used in the Bhagavad Gita as the personal name of Krishna. According to Adi Shankara, the one who did commentary on the 1000 names of Vishnu, acyuta means “the one who will never lose his inherent nature and powers”.The name “acyuta” also means immovable, unchangeable, one who has never fallen.

Now, after listening to the name “acyuta”, the first question that arrives in our mind is, why is Lord Vishnu called acyuta? In Sanskrit, chyuta means someone or something that has fallen, failed, declined, wavered, deviated, etc. So, the Lord Vishnu is not a subject to Desha, kaala and nimitta. He is beyond them. Hence, he is “never chyuta”=Acyuta.

Some of the people also name their baby boy as acyuta. The name acyuta is generally adopted by Indians. The boy with the name acyuta has moon sign (Rashi)- Aries (Mesh), has a lucky number-7, and star (nakshatra)- Krittika.The term acyuta has its meaning in various religions such as Hinduism, Sanskrit, Jainism, Prakrit, the history of ancient India, Marathi, etc.

What Does Acyuta Mean?

In Hinduism, Achyuta (IAST: Acyuta) transl. “the infallible one” is an epithet of Vishnu and appears as the 100th and 318th names in the Vishnu Sahasranama. It is also often used in the Bhagavad Gita as a personal name of Krishna.