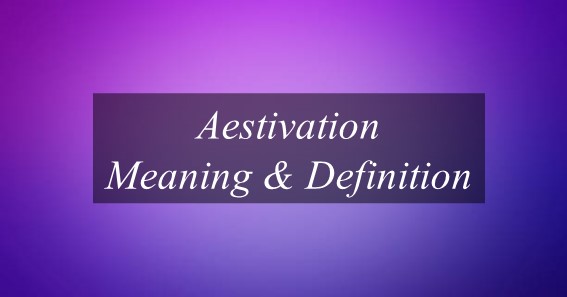 What Is The Meaning Of Aestivation?

The meaning of the term aestivation is that it is a prolonged torpor or dormancy of an insect fish, or amphibian during a hot or dry period. You can also define aestivation in terms of botany as the arrangement of petals and sepals in a flower bud before it opens.

The expression aestivation is also spelled as estivation in American English. You can also define the meaning of the word aestivation as a state of animal dormancy, similar to hibernation, although taking place in the summer rather than the winter.

Aestivation is most commonly distinguished by inactivity and a lowered metabolic rate, that invades in reaction to high temperatures and arid conditions. Aestivation usually takes place during times of heat and dryness, the hot dry season, which are often the summer months.

Both terrestrial, as well as aquatic animals, undergo aestivation. The fossil record also suggests that aestivation may have discovered several hundred million years ago. Invertebrates, as well as the vertebrates animals, are known to enter this state in order to avoid damage from high temperature and the risk of desiccation.

Examples Of The Using Word Aestivation: