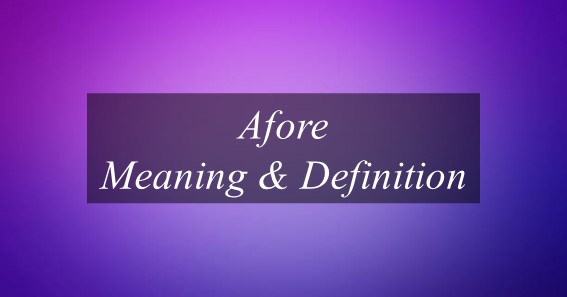 Contents
1 What Is The Meaning Of Afore?
2 Examples Of Using The Word Afore Are:

What Is The Meaning Of Afore?

The meaning of the term afore is “before”. So basically you can also give the definition of afore as something that is done previously. The word afore has been originally derived from Middle English afore, aforn, from Old English onforan or aetforan.

Other words that can be synonymous with afore can also be given as ahead, since, back, previously, sooner, before present, etc. While, some of the antonyms can also be stated such as lastly, subsequently, next, afterward, even after, since then, in the future, etc.

You can also understand more clearly about the meaning of afore by making the use of the word in the sentence. Some of the examples can be stated as Pete spotted them afore they saw us, he died the day afore yesterday, a human being’s evident fear is that he should die afore his time, etc.

Most of the people often also question that, what does aforesaid mean in a will? So basically, we all know that anything that is talked about before is called as aforesaid. So if in the text of a legal document there is a reference to charges that were mentioned earlier in the document, then that is an example of the aforesaid charges.

Examples Of Using The Word Afore Are: