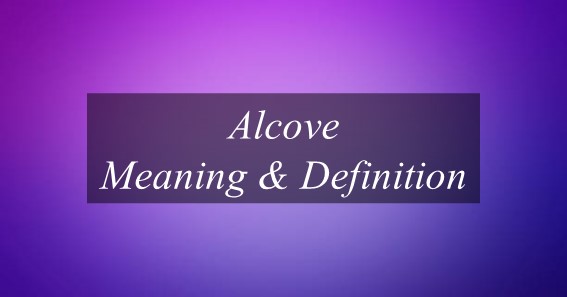 Find The Meaning Of Alcove?

What Is The Meaning Of Alcove?

Meaning Of Alcove In English,

The meaning of the term alcove is that it is a small space in a room, formed by one part of a wall being further back than the parts on each side. The other words which can be synonymous with the alcove are recess, cavity, indentation, corner, hollow, nook, opening, bay, booth, etc.

The term alcove is derived from the French “alcove”, from Spanish “alcoba” or Portuguese “alcova”, and from Arabic, which means vault, the chamber with a vaulted roof. You can also define the alcove as, they are large, arched recessions formed in a cliff wall.

But remember that, the alcoves are different from caves. Generally, the alcove formation is caused by water that seeps into cracks, freezing and thawing in them, eventually expanding and slowly pushing the rock apart.

Most of the people often question that, what is an alcove in a house? So, the alcove is usually a recess opening off a room or other space enclosed by walls or hedges. In the medieval architecture, this alcove was generally used as a sleeping space off the main body of a drafty hall.

You can also understand more clearly about the meaning of alcove by making the use of the term in the sentences. For example, the shadowy figure disappeared into an alcove.

Examples Of Using The Word Alcove Are:

What Are The Synonyms Of Alcove?

Synonyms of Alcove Are:

What Are The Antonyms Of Alcove?

Antonyms of Alcove Are:

What Are The Related Words Of Alcove?

Related Words For Alcove Are:

What Is The Synonym Of Alcove?