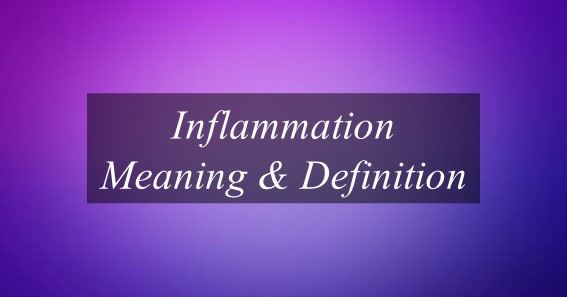 What Is The Meaning Of Inflammation?

What Is The Meaning Of Inflammation?

The meaning of the word inflammation as a noun is a localized physical condition of the body or a localized reaction that produces redness, warmth, swelling, and ache as a result of infection, irritation, or injury. Inflammation also means a part of the complex biological response of body tissues causing a painful redness or swelling of a part of your body and immune vascular response to an inflammatory stimulus.

The meaning of Inflammation refers to your body’s process of fighting against things that damage it, such as infections, injuries, and toxins, in an attempt to heal it. It meant a response triggered by damage to living tissues. It acts as a defense mechanism that evolved in higher organisms to protect them from infection and injury. The basic purpose of inflammation is to restrict and get rid of the injurious agent and to eradicate damaged tissue components so that the body can start on to heal. The four cardinal signs causing inflammation are—

Common symptoms of constant inflammation include:

These symptoms of inflammation can vary from meek to severe and last for more than a few months or years.

So, the meaning of inflammation refers to the process of the way our body act to the diseases or injury, it is basically a response process involving our body.

Examples Of Using The Word Inflammation Are: