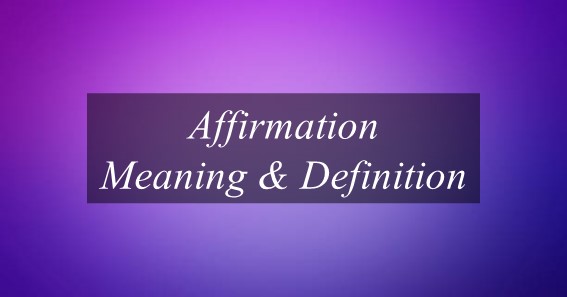 What Is Meaning Of Affirmation?

The meaning of the term affirmation is the action or process of affirming something. In other words, you can also define affirmation as emotional support or encouragement. To publicly show your support for an opinion or idea can also be defined as affirmation.

The other words which can be synonymous with affirmation can be stated as, assertion, proclamation, assurance, pronouncement, statement, etc. While, the antonyms can be stated as denial, refutation, rejection, abandonment, nullification, refusal, demurrer, etc.

You can also understand more clearly the meaning of affirmation by making the use of the word in the sentence. Some of the examples can be given as, the deal was closed with a solemn affirmation instead of an oath, affirmation of the existence of God, the parties are sometimes required to take an oath or make an affirmation, there is an affirmation of divine fiat or instantaneous creation, etc.

It would be very amazing as well as interesting for you all to know that, the term affirmation originally comes from the Old French afermacion, from Latin affirmare, meaning “to assert”. You can also give the meaning of affirmation as a declaration that something is true.

Examples Of Using The Word Affirmation Are: