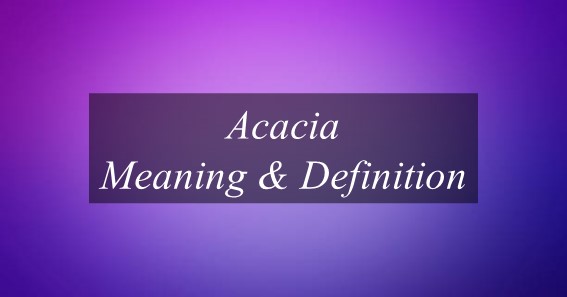 What Is The Meaning Of Acacia?

The meaning of acacia is that it is a tree or shrub of warm climates which bears spikes or clusters of yellow or white flowers and is typically thorny. The term “acacia” can also be defined as a tree from warm parts of the world that has small leaves and yellow or white flowers. The acacia is also commonly known as wattles or acacias. An acacia mainly belongs to the subfamily Mimosoideae of the pea family Fabaceae.

The acacia tree belongs to the kingdom of Plantae group. Acacias are the graceful trees that grow in a warm climate such as Hawaii, Mexico, and the southwestern United States. The color of the foliage is typically bright green or bluish-green. These types of trees are usually fast growers, but they live only 20-30 years. These trees require full sunlight and grow in nearly any type of soil, such as sand, clay, or soil that is highly alkaline or acidic.

The most preferable soil is the well-drained soil for the growth of acacia, but it can also tolerate muddy soil for a shorter period of time. Although the tree is disease resistant, it can sometimes be affected by some kind of fungal disease known as anthracnose.

Examples Of Using The Word Acacia Are: