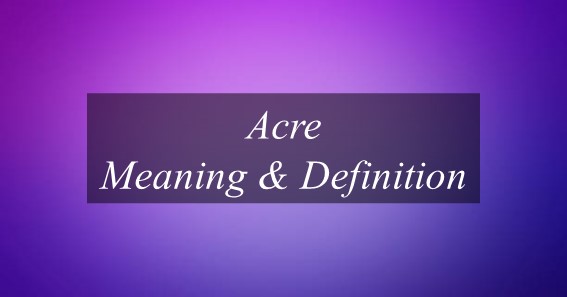 What Is The Meaning Of Acre?

What Is The Meaning Of Acre?

The meaning of the term acre is that it is a unit of land area equal to 4840 square yards, i.e. 0.405 hectares. You can also define the term acre as, a unit of land area used in the imperial and US customary systems. Information based on the International yard and pound agreement of 1959, says that an acre may be declared as exactly 4046.8564224 square meters. The SI Unit of the acre is m^2 and the symbol is given as “ac”.

The most general use of the acre is to calculate tracts of land. The acre is generally used in a wide number of currents and former Commonwealth countries by custom, and also in a few, it also continues as a statutory measure for lawful agreements. The countries that use acre include Antigua and Barbuda, American Samoa, The Bahamas, Ghana, Guam, Montserrat, Samoa, Saint Lucia, St. Vincent and the Grenadines, Turks, and Caicos, etc.

The term acre is derived from the Middle English term “Aker” and “akin” from Latin, which means field. You can understand more clearly the word acre by making the use of the word in the sentence. For example, the house sits on two acres of land, they own hundreds of acres of farmland, etc.

Examples Of Using The Word Acre Are:

Why Is It Called Acre?

The word is derived from the Latin word ager, meaning “field.” The basis for choosing those measurements came from a primitive time when a field or plot was designated by the oxen needed to plow it or the seed needed to sow it.