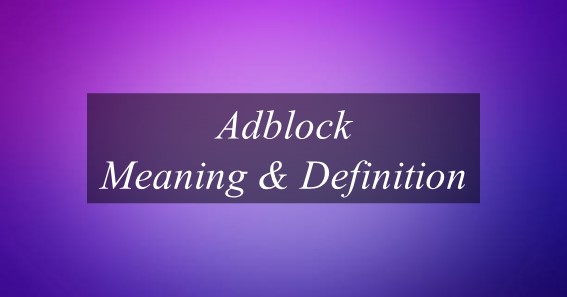 Find The Meaning Of Adblock?

What Is The Meaning Of Adblock?

The meaning of the term Adblock is that it is a content filtering and ad-blocking browser extension for the Google Chrome, Apple Safari (desktop and mobile), Firefox, Opera, and Microsoft Edge web browsers.

Adblock also allows users to prevent page elements, such as advertisements, from being displayed. AdBlock is free to download and use, and it also includes optional donations to the developers.

It was created on December 8, 2009. It is the same day that support for extensions was added to Google Chrome. The original author of the AdBlock extension is Michael Gunlach, whereas the developer is BetaFish Incorporated. The extension is written in JavaScript.

It will be amazing to know that, this browser extension is also available in 51 different languages. The author of AdBlock claims to have been inspired by the Adblock Plus extension for Firefox, which was itself based on the original Adblock that ceased development in 2004.

Note that, adblock’s efforts are not related to Adblock Plus, but from 2016 AdBlock has been based on the AdBlock Plus source code.

Most of the people question that, which filter Adblockuses?. So, AdBlock uses the same filter syntax as Adblock Plus for Firefox and natively also supports Adblock Plus filter subscriptions.

Why Do People Use Adblock?