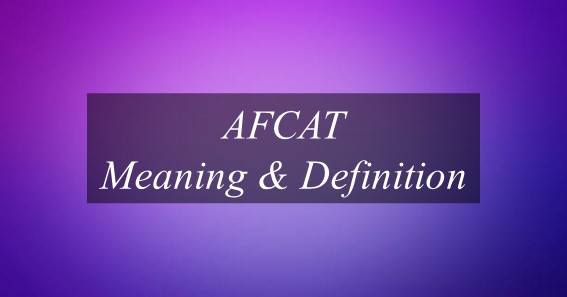 What Is The Meaning Of AFCAT?

AFCAT is basically an acronym that stands for “Air Force Common Admission Test”. You can also state the meaning of AFCAT as, for all the entries other than NDA and CDSE and for all the branches, candidates have to undergo the AFCAT. This test is conducted all across India by the Indian Air Force. It is generally a written exam conducted twice a year in February and August.

It is basically a national level competitive exam manged by IAF(Indian Air Force) to choose officers for all its branches, except for the medical and dental branches. Advertisements inviting applications for AFCAT are most probably out in June and December and the candidates are allowed to apply for the examination as per advertisement.

There is a negative marking system for the AFCAT examination. Where there are 100 questions in the paper and each question consists of three marks and the total time allotted is for two hours. The question paper is basically divided into 4 sub-topics which can be stated as General Awareness, Verbal Ability in English, Numerical Ability, and Reasoning and Military Aptitude Test.

Discussing the preparation part, as compared to other Defence exams such as CDSE, AFCAT is comparatively easier side, but having said that, one should not take it easy also, as day by day rivalry in AFCAT is expanding rapidly.