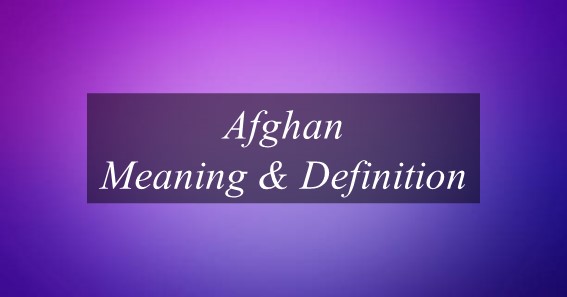 What Is The Meaning Of Afghan?

The meaning of the term afghan is that it is a native or inhabitant of Afghanistan or a person of Afghan descent. In simpler words, you can also give the meaning of afghan as the people belonging or relating to Afghanistan, or to its language.

Formerly, the term Afghan has been utilized to designate a member of the Pashtuns, and that usage still continues in some places in Afghanistan. It would also be very interesting for you all to know that the name Afghanistan is originally derived from Afghan, which means the land of the Pashtuns and is cited to the Pashtun tribal regions south of the Hindu Kush mountains.

But, through the 19th century, the term Afghan was used by various writers as a synonym for “Pashtun”, but such usage now is rare in English. You can also say that, generally, the term  “Afghan” refers to every citizen of the state of Afghanistan, regardless of the ethnic group the individual belongs to.

The earliest mention of the name Afghan is by Shapur I of the Sassanid Empire during the 3rd century CE, which is later recorded in the 6th century in the form of “Avagana” by the Indian astronomer Varaha Mihira in his Brihat-Samhita.

Examples Of Using The Word Afghan Are: